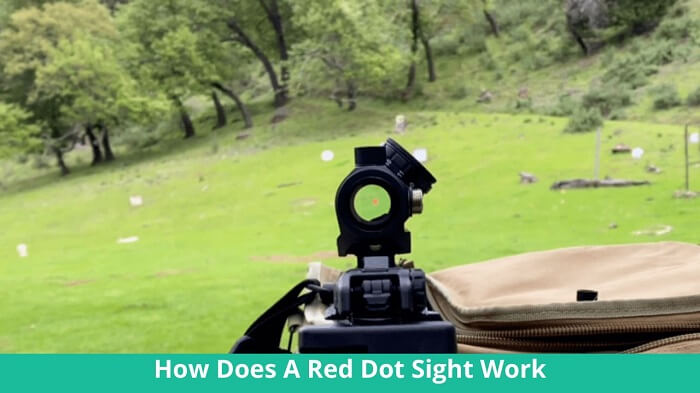 A red dot sight is an optic type of non-magnifying reflector sight for devices that require aiming such as firearms. It gives the user a point of aim in the form of a red illuminated dot. Using red dot sights is easy and they are great for helping first-time shooters aim accurately.

Just by the name, the optic uses red dots as the reticle. Working with close ranges of 100 yards or less, red dots are preferred because of their simplicity and first acquisition.

Red dots are commonly used during civilian target shootings, hunting, and in police or military mission settings. They can also be used on cameras and telescopes, whereby cameras, they’re used to take pictures of flying aircraft, flying birds, and other objects moving quickly at a far distance. Read on to find out how exactly a red dot works.

The MOA is a unit of angular measurement of a circle, it stands for “minute of angle”. The red dots optics is measured in MOA, which explains the size of the dot and how far it goes at a certain distance.

2 MOA- It’s the smallest and its intensity can be increased by a magnifier to make the dot look a little bit bigger.

4 MOA- This will be ideal for shooting at the target if you need a fast precise and more accurate shooting. And can also work as a solution if there’s difficulty using the 2 MOA.

6 MOA- The dot is quite bigger and much brighter compared to the two. When it comes to a fast-moving target where the shooter has a minimal chance to make his/her shots then the 6 MOA is the optimal choice.

How Does Red Dot Sight Work?

The red dot sight typically uses a red LED (Light Emitting Diode) that allows the red dot reticle to stay in alignment with the firearm regardless of the position of your eye.

The red dot is made up of a spherical mirror that has a specific coating thus allowing only red light to pass through, the mirror is also tilted to an angle allowing it to reflect the red LED.

Depending on the settings of brightness the red dot sight can last up to hundreds of hours. The red dots can only be seen by the aimer when aiming for the target but cannot be seen when looking from the other side therefore it will not scare targets away.

Factors Affecting The Shooting Range Of A Red Dot Sight

Several factors determine the shooting range of a red dot. These factors include the following:

The dot has to be smaller for the range to be effective. For instance, an antelope that is 50 yards away takes 15% of the viewfinder. However, the same antelope will appear to be much smaller on the viewfinder and to the shooter’s eyes if it’s at a greater distance of 250 yards away. Targeting the two antelopes in those two distances will not be accurate if the dot sizes remain the same for the two. Therefore, for accuracy, the shooter has to adjust the dot sizes by the same proportions.

Apart from having a high quality and effective red dot, the shooter also has to have good aiming skills with good eyesight to make an effective range.

The better the quality of the red dot used by different manufacturing companies the more effective range it will give.

Targeting an object that is closer is easier compared to an object that is at a greater distance. The closer the object the more space it takes on the viewfinder thus making it look large and easy to aim at with the red dot.

Aiming at the target in a broad daylight gives an effective range because there’s clear visibility compared to when there’s decreased visibility such as at night.

The higher the contrast between the target and the surrounding the easier it is to make an effective range. For instance, it might be more difficult to shoot at a deer that’s in a green environment than when it is in pale or brown fern grass.

Using a magnifier is an added advantage to making an effective range as it increases the range of the red dot sight.

What are the Benefits of Red Dots?

Do you need a red dot sight? What are their advantages? Let’s find out!

The reason why shooters mount red dots on their pistols is that it makes the sighting of their targets faster and easier be it long ranges or precise short ranges. For instance, red dots would be of real help on occasions such as shooting at hostage-takers who are in very close contact with the hostages. In this case, the red dots give a very precise and efficient aim.

Red dots are much preferred to use with night vision because they give much brilliant focus and are easy to utilize while wearing the NVGs. The other alternative is to use the IR Lasers like the X4ØØV-IRC, but red dots are the best.

When using a rifle with the red dots, you’re able to stay focused on the target throughout when taking the shots thus preventing making the shot times slower. This is an added advantage because the aimer won’t have to shift their focus between every target and their sights. Also, this explains why in competitions, the fastest shooters are given pistols with red dots.

The brightness of the dot is a considerable factor in different scenarios during night fighting. And red dot is more effective because it has the right brightness, i.e. not too bright or too dim.

When determining which red dot is right for your firearm, two large factors are considered. The Preciseness to hit objects that are at greater distances or the ability to hit targets that are close enough but moving at a very high speed. Therefore, the red dots for firearms are beneficial and worthwhile pieces that many personnel should consider as an option based on their operational needs.

Comparison Between Camping Cot Vs Air Mattress: Which Is Comfortable