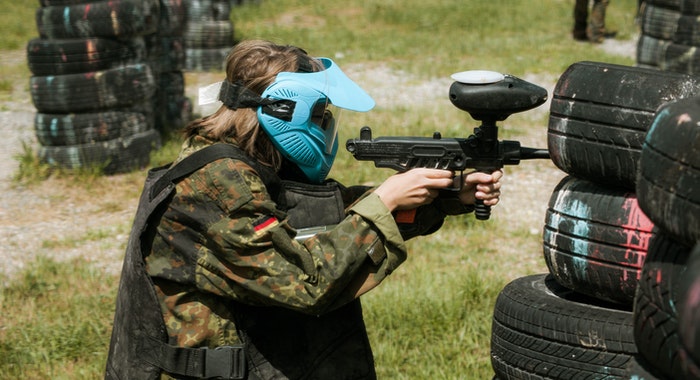 Have you ever noticed that paintballs move at a bullet speed when playing? You may be wondering, what is the exact pace at which the paintball moves? Paint balls can move as fast as bullets.

What is their speed exactly? An average paintball moves at approximately 300 feet per second, a speed much slower than a gun.

Paintball game is fun for both children and adults. How much do you know about the impact that comes with that ball when it explodes on you? Let us get down to business to understand the practical details.

How Fast Does A Paintball Gun Shoot?

If you are interested in paintball game, you probably ask yourself several question like the cost of paintball, how a paintball works or how fast a paintball shoots.

There is a great risk of players getting injuries from the fast-moving paintballs. This is because players fire the paintball guns at speeds between 240 and 280 feet per second. This is about 160-190 miles per hour.

The average speed is set at this so that the paintball can explode when it reaches the target without causing any injury. With this speed, the paintball can hit your target in about a third of a second when standing at about 100 feet from the target.

Not so many people can comprehend the speed in FPS. You need to convert it in miles per hour for easier understanding. You can calculate this speed in FPS because of the short range of the markers.

How Does A Paintball Gun Work?

Most people enjoy playing with paintballs but do not know how the paintball gun works. A paintball gun is made in such a way that the ball will fall out of the hopper and land into the barrel.

There is compressed gas in the paintball cartridge that expands. This gas then propels further down the barrel and finally out of the gun when the trigger is pulled. The paintball fits right into the barrel size and hence will block any gas from escaping.

This means the gas will escape with the ball, leading to the paintball exiting at a very high speed. The inside of the gun has a regulator that controls how much of the gas gets out.

When the paintball speed is high the number of petrol increases. If you need a heavy projectile, it means you need to exert more pressure, which translates to higher gas pressure.

Does a paintball hit hard?

There is no one straight answer to this question; it all depends on how far the shooter is and where you were hit exactly. However, you will not get hurt if the ball breaks as soon as it hits you since the better part of the impact spreads.

If the ball does not break (bounces back), you will absorb most of the impact and therefore you may feel some bit of pain. There is no need to worry since you will not be punched too hard to get a bruise.

Paintball game professionals recommend that gun fires at a speed less than 300 fps to reduce the chances of turning a safe sport into a dangerous one.

How do you protect yourself from a hard paintball hit?

There is no guarantee that you will not get hurt when playing paintball.it is only logical that you protect yourself. After all, prevention is always better than cure.

The best way to protect yourself is to wear a protective vest that will reduce the impact on your body. The vest plays an important role in helping the ball bounce back when it hits you.

You must cover your face too using a paintball mask or goggles. Since these gears protect you throughout the play period, it is advisable not to take any of them off. If you must remove it, then leave the playfield first.

How to play paintball game

Follow the steps listed below to play paintball without injuring yourself or others.

The game aims to shoot more of your opponents so that you win the game. If unfortunately you are shot, leave the field. Remember not to take off the safety gear while inside the field.

How many balls can a paintball gun shoot per second?

The paintball game becomes more interesting when the balls hit as many as possible (provided they do not hurt). A paintball gun can fire as fast as you pull the trigger.

There are paintball guns that have long, hard triggers capable of firing up to6shots in a second. You will be surprised to learn that paintballs that are fired by a circuit board fire as many as 30 balls per second.

If you have been watching a paintball game from a distance for fear that the ball hard, no need anymore, will hit you. You already know that the ball is not very hard and the speed at which it travels if reasonable, you can rest assured of no serious injuries.

You can join the game now and have fun. The gun can shoot at 280fps, which is not as fast as a bullet and you will not get hurt. Take time to learn the rules and practice the game and you are good to go.