Tippmann A5 vs 98 Custom – Detailed Comparison

Paintball wars can make your blood pump so fast, especially if you are a true fan who is crazy about the game. The feeling that comes with the mimicked combat and the resultant adrenaline rush is what makes most people want to get accustomed to this game.

To keep the thrill alive and to make the most out of every game against your opponents, you need the best paintball gun.

Today we compare two of the best paintball guns; Tippmann A5 vs 98 Custom. Both guns are from the reputable paintball equipment player Tippmann and each has areas where it outshines the other.

There are similarities shared by these two guns. Besides the fact that they are made by the same manufacturer, they were also introduced to the market in the same year, and the same designer adopted the already utilized design of 98 to make the A5.

This comparison review is tailored to help you determine the better option between two of the top guns in the game.

Through the below comparisons, you can learn more about similarities and differences between Tippmann's two of the best paintball markers; the A5 and 98 Custom. They have been compared based on some of the most important factors and features.

These two paintball markers operate with the same mechanism. They both use the Open Bolt Blowback operation mechanism. Open Bolt refers to the position of the marker's bolt when it is ready to fire.

On the other hand, Blowback means the HPA or CO2 propellant blows the bolt back to its original position to prepare it for the next shot, as well as blowing the paintball forward through the barrel. This mechanism is the most common and is loved by players because it provides a less complex way to fire the guns.

If you are starting in this sport and you need the best paintball gun for a tournament, the Tippmann 98 Custom comes in handy. It is stylish and would give you a competitive edge in a tournament against your opponents.

Additionally, it is easy to clean. The marker is also equipped with anti-chop technology, which eliminates most paintball breakage. This technology greatly enhances the gun's reliability in the field.

The Tippmann A5 also has some of the qualities seen in 98 Custom, which means the difference in their performances is so minimal you may not even notice it. Therefore, expect an impressive performance from this second paintball gun too. It is accurate and steady, which makes it one of the paintball players' most favorite guns.

Both paintball guns have a unique design that players love. The markers look very much alike, but they also have several noticeable differences. The barrel lengths of Tippmann 98 and Tippmann A5 are the same at 8.5 inches, and this part is easily customizable in both guns with various barrel portions available. 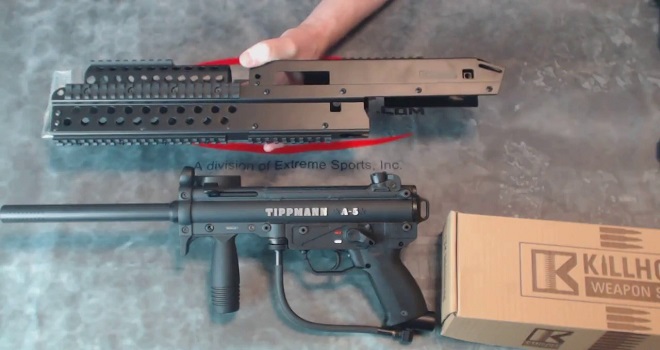 The 98 has a more aggressive look and features a grip that perfectly suits it. The A5 also has a similar grip but with slightly better and smoother material. Generally, its grip is firmer and better than that of 98, which makes it look cooler and more badass.

Another difference is in their length. The Tippmann A5 is slightly shorter than the 98, which also makes the former pretty easy to handle. The 98 custom measures 19.63 inches in length while the A5 is 19-inch long. Therefore, you will not strain your hands and arms when you are using any of them.

There are notable similarities in shooting ability too. Both markers have a very effective shooting range of at least 150 feet. Tippmann 98 shoots pretty much like many high-end tournament paintball markers yet it only costs a fraction of their prices. Both guns are semi-automatic and each shoots with 0.68 calibers.

Both markers are also safe to use with either HPA or CO2. Hence, since you can use whatever option is available, the guns offer you flexible options and make your life easier in the game. Similarly, these are robust markers with the same operating pressure of 800 psi.

Both paintball markers can shoot at a rate of 9+ balls per second. The common shooting rate is 15 BPS. And since they both have an internal gas line system, the markers are very easy to use.

You can improve the performance of both the Tippmann A5 and Tippmann 98 by changing and adding extensions. However, the A5 is slightly better in this area. It boasts of an easy locking and unlocking system that makes it easy for you to add and remove the accessories necessary to the task at hand. 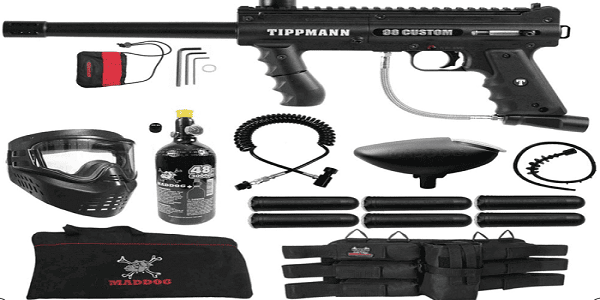 All the accessories available on the market today for any of these paintball markers can be used on the other. You can enhance the power, better the grip, add more range, and improve the accuracy. Some of the most common accessories shared by both markers include E Trigger Custom System, Tippmann Cyclone Feed System, 16-inch Sniper Barrel, and Tippmann Flatline Barrel.

Weight is one of the few areas in which these two guns have a notable difference. The Tippmann A5 is the heaviest between the two at 3.2 pounds while the 98 Custom weighs 2.9 pounds. Both weights have both their advantages and disadvantages and affect the game differently. They are very attractive and likable.

The A5 and the 98 Custom, both made by the reputable Tippmann, are incredible paintball markers. Both new and experienced users will love them in every way possible. The paintball guns never disappointed in tournaments and would make victory easier to achieve.

If you want to get the most out of these guns, you need to take your time to better understand them, including a thorough analysis of how they work. They are both durable and feel natural to use. Choosing between the two may not be easy because the choice would depend on personal preference or how you want to play on that day.

Learn More About Tippmann 98 vs A5 : Which is better?