Oftentimes when we play airsoft, we focus on the game alone and forget to develop an interest in other equally relevant components. Among the areas that are largely given little attention is the level of innovation involved in creating the equipment and the mechanisms used by each of them. We forget about the impressive arsenal that we use or have access to. For almost any piece of real weaponry, there is an airsoft equivalent. Apart from the various types of airsoft guns, we have airsoft grenades.

The grenades are useful tools that would add value to your list of equipment. Similarly, they make airsoft sport more satisfying and entertaining. When you add these to your arsenal, you can flash a room before stepping in, set up ambushes in outdoor environments, or clear out a bunker that is pinning you down. That way, they add new layers of strategy to this amazing sport. Similarly, airsoft grenades add realism and depth to the game.

Types of airsoft grenades and how they work

The various types of grenades work differently. The difference can be in how the trigger works, the time it takes to react, what is used to power them, and more. When it comes to the volume of fire and the impact on the surrounding, most grenade types have a lot in common. You will always get that shock and ewe effect that makes it feel like the real thing.

This type of airsoft grenade looks like the traditional real hand grenades. Operationally, this type is quite straightforward. You fill it up, pull the trigger pin and throw it toward the target area. As a result, a massive volume of BBs will rain on a wide area when the grenade explodes. It works best on static targets and can clear them so amazing.

The part where you fill-up the airsoft hand grenade takes two forms. It is a two-stage preparation that includes filling it with its compatible propellant; green gas or CO2. By filling it up with a propellant, you charge it. In the second stage, you fill it with the right BBs.

If you put in the wrong BBs like if the BBs are too heavy, it will result in slower-moving projectiles. Consequently, the BBs will not scatter as far as they should. The FPS of airsoft hand grenades is not incredibly high. Therefore, the lighter the BBs, the further and faster they will go and fly.

These are among the most common grenade types in airsoft. These single-use grenades contain a small explosive inside that gets ignited when a striking mechanism lit it up. The striking mechanism can be in the form of a match-like feature, and it ignites a protruding fuse, which then burns gradually into the interior of the grenade to ignite its primary content. The gradual burning of the match gives you enough time to throw the device. 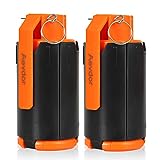 If it is a smoke grenade, then the smoke composition is its primary content. This content is composed of potassium chlorate, a coloring dye, and lactose. It is a concoction that burns to produce thick smoke for about two minutes or even more.

Besides giving you the thrill of a mock grenade in the game, it also, help give you cover in an open space, hiding you from the opponent’s sight and concealing a retreat or advance.

Then there are the frag grenades, whose primary content is in the form of a firework. Therefore, it ignites very quickly when the fuse reaches it. As you would expect, the resultant effect is a loud bang that can even disorient the players close by the point of impact.

Luckily, these airsoft grenades are surrounded by soft projectiles such as powder or dried peas to cause the fragmentation of a real grenade.

Avatar grenades are a good example of specialty grenades. In many ways, they act like traditional grenades. You can throw them just like you would throw a normal grenade, with some even detonating on impact. One of its most distinctive qualities is high customize ability. Hence, you can choose different abilities for different situations. 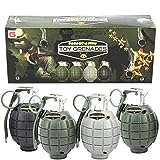 It also boasts of the smart grenade approach, which has revolutionized the traditional grenade segment. They use an innovative features such as a remote burst or delayed burst. The smart grenade approach completely utilizes the different shapes and burst directions as one of the ways to revolutionize the traditional grenade segment.

Under the gas grenades category, there are the projectile kind and the audible kind. The audible type of grenades uses compressed gas, hence producing a loud sound and a pressure wave that can easily disorient anyone nearby. They are usually operated with CO2. 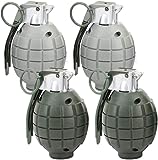 They are filled with the gas then stored using a locking pin that you will have to remove to set the grenade off. It gives you enough time to throw between the time you pull the pin and the time it explodes.

Due to the fire, hot, and burning nature of the explosives, they can cause burns or fire risks that may be so destructive. Dry areas are even at higher risks of burning up to the ground in case the grenade causes fire.

However, some manufacturers now create grenades that boast cool burn formulas that lower the fire risk. Due to their nature, you have to be at least 18 years old to be allowed to purchase them.

However, if you prefer to blow a grenade once and for all, traditional grenades cannot be used again once the BBs burst out of them with a bang. With the advent of the wide variety of airsoft grenades, you should take advantage of the wide availability. There is no limit to the level of fun you can get on the battlefield.