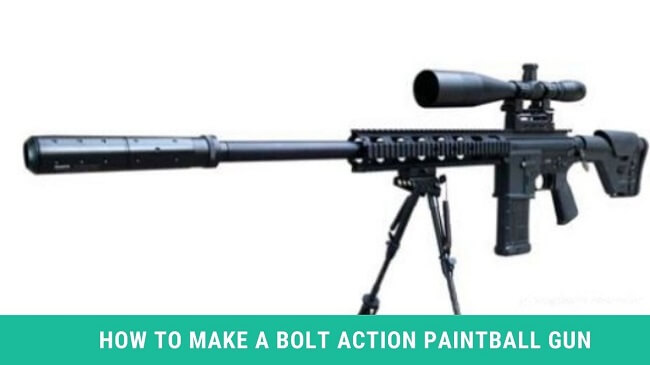 If you have never played the paintball game before, then you are missing a lot of fun. You can enjoy this game with family or friends, indoors or outdoors. The most exciting thing is that you can make some of the tools for the game on your own. The paintball game involves using` a paintball gun to shoot at your opponents.

If you shoot more opponents, you win the game. Balls containing non-toxic paint are fired from the gun to hit the opponent but do not cause any injuries. Let us look at how you can DIY a bolt action paintball gun.

Before you think of making a paintball gun, it is important to know that it is not advisable to make your own. To uphold the safety intention of the game, it is best to buy a ready-made paintball gun. You should also understand how a paintball gun works before you make one.

So, you still insist on making your own? Okay, we shall tell you how to go about it. You will learn how to make a bolt action paintball gun from locally available materials.

While the paintball gun operates with a somewhat sophisticated mechanism, we shall just create a simple one.

Mechanics of a paintball gun

A paintball gun is also known as a marker and has various parts that work together to shoot the paintball out of the gun. There is the barrel, the loader, and gas that propels the balls out. Yes, you heard it right, gas.

Air, mainly carbon dioxide, builds up inside the gun. When the pressure builds up and you pull the trigger, the valve opens and forces air out the barrel. This air moves out together with the ball. The paint gun achieves this by operating like a bolt action gun.

If you choose to buy a paintball gun, you will find two designs of markers, Blowbacks, and double-action designs. You will also be lucky to find electro-pneumatic markers.

You may also like : How Fast Does a Paintball Gun Shoot ? Expert Opinion

Materials you will need

You only need four things to complete the task: barrel, trigger, gas burst, and paintball.

You can make a barrel using a PVC pipe with a diameter similar to the paintballs you intend to use. Most paintballs are usually 0.68 calibers meaning their diameter measures 0.68inches. Look for a PVC pipe that is slightly wider than this so that the ball can shoot instead of rolling out on its own.

You need a PVC valve to act as the trigger. With this, you will decide when the burst of gas moves from the bottle to the PVC pipe.

For the burst of gas, you will need a hand pump like the one you would use to inflate a football.

For the burst of gas, you will need a hand pump like the one you would use to inflate a football.

When making a paintball gun at home, the most important thing is accumulating pressure and controlling how you will release it. The gun has to release several balls with the same pressure. To achieve this, follow the steps below.

Step one: Drill a hole in the cap of the barrel

Step two: Connect a valve to one end of the PVC pipe using hot glue so that it is airtight attach the other end to the drinking hole of an empty plastic bottle and fasten using tape.

Step three: Connect the hole to the end of the hand pump. Use tape to wrap around to make sure it is airtight.

Step four: Pump the hand pump. This will cause the air to move into the plastic bottle but not into the barrel because of the valve.

Step five: Place a paintball into the PVC pipe and open the valve to shoot. Remember not to over-pump the bottle since you are still trying out the new gun.

Step six: Your pump is complete; you can start enjoying the game.

Tip: place a paintball into the barrel to test whether it will fit before you start the connection. If the ball slides out, you need to look for another pipe.it helps to buy a thick pipe.

You may also like : How to Remove Paintball Paint from a Car

One of the major disadvantages of a homemade paintball gun is that if you don't point the gun upwards, the paintball rolls out of the barrel. A detent will prevent this. You can make detents out of elastic-plastic that will hold the paintball place. This will remain in place and only move away when you fire the gun. If you find it difficult, you can buy a decent one online.

As much as it is not advisable to make your own paintball bolt action gun at home, it has several benefits. You not only boost your creativity but also save costs. Gather the materials mentioned above and follow the steps described above and you will be on your way to enjoying one of the best games you can participate.

Once you finish putting it all together, test your new gun in a safe area and ensure you are not pointing at anyone or anything you do not want to break. Remember to wear protective gear and test your new gun before using it for the game.